Paweł Soluch at the Inside Trends conference 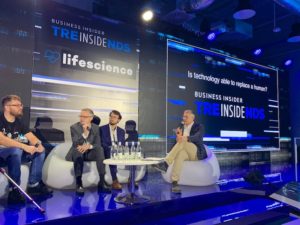 On 18th October, Paweł Soluch, CEO Neuro Device, gave a speech in Warsaw at the Inside Trends conference organised by Business Insider Polska. The event featured key figures from the fintech, life sciences, and digital business industries, who discussed global trends in the world of finance, medicine and health and new technologies.

Paweł appeared on the Life Science stage, where during the opening panel entitled “Is technology able to replace a human”, he discussed the future of technology in the context of human capabilities and limitations. The discussion was also attended by, among others, Mrs Monika Michalak, who had a stroke and is recovering much faster thanks to technological solutions.

“Technology is not yet able to replace the brain. Studying it is like eavesdropping on the conversation of two people in a stadium full of people,” said Paweł. He also stressed the importance of research on brain plasticity and brain stimulation, thanks to which it is easier to diagnose diseases and even save human lives.