Neuro Device is third in the Chivas Venture competition 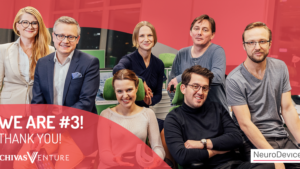 We are happy to announce that we could stand on the podium of the first stage of the international Chivas Venture competition. Thanks to the votes of Internet users from all over the world, we were at the forefront of socially responsible startups, and thanks to the prize (20 thousand dollars), our project, a system for effective support of aphasia therapy, has a chance for faster implementation.

Aphasia is a speech disorder that prevents the affected person from communicating normally with others, communicating their needs, opinions, and emotions. Such patients cannot write, read or speak. According to the available data, this disorder affects 1 in 250 people in the world. Unfortunately, aphasia therapy is very difficult, long-lasting and unavailable for the majority of people. Our project, thanks to the involvement of Internet users, can change this.

More votes were only cast for startups from China and Brazil – LianDi and Revoada, which took first and second place respectively. Congratulations and we are glad that we found ourselves in such great company.

We thank all those who supported us, believed in our project, gave their votes and encouraged others to do so.

But it is not over yet. In less than a month’s time, we are going to Amsterdam for the very final of the Chivas Venture competition, in which there is a prize of USD 750 000 to be won. Here the jury will decide on the victory. If they choose our project, we will get funds for its further development, so that those suffering from aphasia all over the world will get a device that will help them get back to normal life quickly.