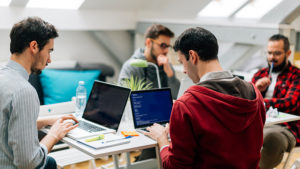 Brainathon is an unusual event, a form of hackathon, which aims to develop brain-computer interface (BCI) technology that can be widely used in the treatment of severe neurological disorders such as Alzheimer’s disease, epilepsy or aphasia.

Participants of the event will have 24 hours to develop one of the selected projects based on brain-wave control (including a lamp, a computer game, an orthosis). The work on the projects will be supported by experienced scientists and engineers who have been developing BCI technology for years.

Brainathon will be held on 21-22 April this year at FutureLab – Intelligent Laboratory Space of the Future, which is part of the Poznan Supercomputing and Networking Center (PSNC). We invite anyone who knows a little bit about programming (JAVA and C is a minimum), is of age, speaks English, has a great deal of imagination, is willing to learn and improve the world. Participation in the event is free of charge. Applications are accepted until 10th April via the website: http://www.br41n.io/Poznan-2018. The best projects will be awarded with a cash prize of PLN 150,000 and new professional opportunities will be opened for their creators. Details concerning the event can be found here.